This is a guest post by Stefan Didak, who tested Mozy 2.0 for Mac back in November on his new iMac and wrote about it in December. And yes, it is February now that I’m posting it, and have no one to blame but myself. 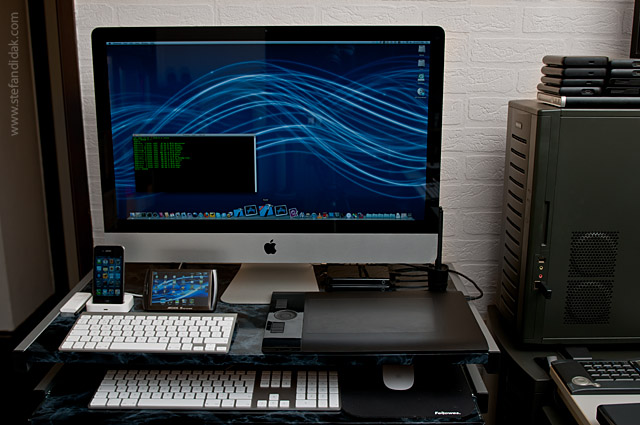 Installation was quick, easy, and took up an estimated 65MB.

After entering your user e-mail address and password you get to sign up for an account or use a product key if you already have one. I had one provided by Mozy for the purposes of testing.

During the first time configuration you will be asked whether to use the MozyHome’s key or your personal key for encryption purposes [5]. Mozy will encrypt your data with a 448-bit key to keep prying eyes from sniffing around in your data, which can be especially useful if you’re on a public or local Wi-Fi connection that can easily be intercepted and sniffed for packets. (That means capturing your data as you transmit it over the network.)

I created an encryption key of my own and saved it to a safe place because Mozy does not have access to the key so if you misplace it or flake out and forget it you will not be able to restore your files! Make sure you have a backup of your key in more than one place.

After going through the setup and configuration I directed MozyHome to some folders I wanted it to use as the source of the backup.

The main interface (which you hardly ever need to look at because Mozy will do all its work in the background) shows the schedule of the next backup, when the previous backup was made, how many files are selected and how many are going to be backed up on the next scheduled interval. And, of course, how much storage space you are using for all these files.

Mozy allows you to define the backup schedule and how much network bandwidth you will allow it to use (so it won’t interfere with other network traffic).  set the schedule to do its backups every day at 3:30AM and decided not to limit the bandwidth at all since there’s not a lot of network traffic on my internet lines around 3:30AM.

Once Mozy started doing its backup the main dialog for MozyHome can show you that a backup is in progress. It’s unfortunate that MozyHome did not take full advantage of the 20 Mbps upload (upstream) speed on the internet line that the iMac is using. The speed of performing the backup of the selected folders varied greatly ranging anywhere from 2KB/s to 250KB/s but at no point provided a constant speed. There is some CPU usage going on because of the encryption being performed but when looking at the processes involved with the Mozy backup it didn’t seem like those were a bottleneck on a 2.93Ghz Quad Core i7.4.

An earlier version of MozyHome was also tested because this newer version has higher upload speeds. Unfortunately it was difficult to reach a conclusion because of the inconsistent upload speeds and lack of consistency but it does seem that the new version is generally a bit faster. However, on a powerful enough system it does not appear to take much advantage of a 20 Mbps upstream in bandwidth.

Once I had a few GB’s worth of data backed up (and that took a few days, mostly incrementally because the iMac was not powered on 24/7) it was time to try restoring (that is, downloading) some files. Selecting the files and the destination where you want to restore them is about as simple as it gets. And it got the job done even though I did cancel the restore after a while of testing. But again the bandwidth used (out of a 120 Mbps downstream bandwidth) was far below the capacity of the internet line and as you can tell from the screenshot, restoring files peaked at 326KB/s. That’s not bad at all for most users with consumer grade internet lines but quite a lot below the 12-14 MB/s I often get from the 120mbps line.

During a real crisis scenario, the performance may not matter as much getting your precious files back again—or every minute might be costing your business money.

In conclusion, I would recommend a local, high speed, backup, for the Mac, preferably using the included Time Machine and an external hard drive (a FW800 drive is really very spiffy), but that means both your system or laptop and its main backup are in the same physical location. But if you want a secondary backup that’s off-site, easy to configure, requires very little involvement or manual action to get it going, MozyHome does provide what you may need for that purpose. Just don’t expect extremely high speeds and fast backups and restores.

When I first tested the Windows version of Mozy, somewhere around 2007, slow upload time was the major drawbacks I noticed. But that seemed to be an issue with most online backup tools. And everyone knows the so-called high-speed Internet in the United States is a joke compared to what’s available in Asia and in Western Europe.

So I was surprised—particularly given what Todd Esplin said in the interview about greater upload speeds—that a fast Internet connection didn’t result in fast backups. I had some discussions with the Mozy team about this, but they weren’t conclusive. Naturally a process that requires encryption and other kinds of encoding (for versioning, say) is going to be slower than a straightforward FTP transfer. But it doesn’t seem logical that it should be that much slower.

As long as speed is not of the essence—and after that first backup, things do go more quickly—Mozy has a lot going for it. They’ve been around a while, and have EMC behind them. They’ve got a great sense of humor. The software is easy to use. You  can choose your own encryption key. It gets your data off-site, which helps protect you against theft and natural disaster.  And there don’t seem to be that many other options for online backup for Mac, though there are lots of competitors in the Windows market.

If you know of a better tool for backing up your Mac online—and particularly a faster one—write in and let us know. Leave a comment on the blog or send a message to sallie [at] fileslinger [dot] com.