My main computer, Enheduanna (Enna for short), is a 17” HP Pavilion dv8040us laptop. She occupies a good deal of lap and weighs about 40 lbs. (I know the official stats on the dv8000 series say it’s less than that, but once I pack her up with the power cables, it sure feels like 40 lbs.) As a desktop replacement, Enna is wonderful, but she does suffer a bit in the portability department.

My secondary machine, Astarte, a 14.1” Dell, is still pretty hefty (about 7 lbs not including the power cables), and besides, she’s old enough to be notably underpowered and in some danger of suffering a critical failure of one component or another pretty soon. 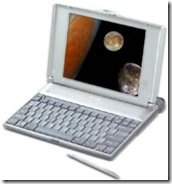 So I’ve been jonesing for a netbook to replace the Sharp Mobilon Pro handheld PC I bought in 1999, back in the days of Windows CE. Vamana ran “pocket” versions of a handful of Microsoft programs and had a modem but no Ethernet port. You couldn’t print from him, and you had to transfer files to your main machine through a rather tricky infrared connection or an equally tricky serial connection. But he was great for taking notes, and his battery lasted 12 hours when he was new.

I remember there was a backup option built into the sync software I used to use with Vamana. I thought I wrote about that at some point, but if so, it was in the days before the blog, and I didn’t save that particular e-mail message to post later.

As of Thursday morning, I am the proud owner of an Asus Eee PC 1000H, less than half the size and about 1/4 the weight of Enna. Mena (short for Enmenanna) actually has the same basic specs as Enna: 1 GB RAM and 160 GB HD. (If she were one of the Eee PCs with the solid-state disks, like the beautiful but overpriced S101, she would weigh even less.) So unlike Vamana (whom I always called Van), Mena is not a glorified PDA. She’s a real computer. I may choose not to keep much data on her, given that I’m only going to be using her when I’m out at conferences or traveling, but I still have to back her up.

Before I go on, I suppose I’d better explain about the names, particularly for anyone who might be new to this blog and the strange workings of its author’s mind.

I was a classicist in my former life. I translated Greek and Roman drama for the stage. This left me with a tendency to name my computers after mythological figures, not always from the Greco-Roman tradition. The first computer I owned was Prometheus; the second, naturally, was Epimetheus. Enheduanna was not a myth, but a real woman in history, the daughter of Sargon the great, and the first author whose name we know. (She was the high priestess of Nanna in Ur and wrote a famous hymn to the goddess Inanna known as the Nin-Me-Sara.) Enmenanna was her great-niece and eventual successor as priestess. If you’re me, naming the two computers after relatives is logical.

Back to backups. One of the noteworthy characteristics of netbooks, and one of the reasons they are small and light, is that they don’t have optical drives. (“Optical” means CD or DVD and refers to the fact that the disks are written to and read from with light in the form of lasers.) As it happens, Enna doesn’t have an optical drive right now, either, because I’m in the middle of replacing it.

Now, there are plenty of ways to make backups without using an optical drive. But one of my first priorities for Mena was making a drive image, because she didn’t come with a proper operating system CD. One might well wonder what good an operating system CD would do when the computer doesn’t have a CD drive, but a netbook can use an external CD drive connected by USB. Theoretically, anyway—Mena won’t recognize the external CD/DVD drive that I already own, even though Enna does. And without an operating system CD, it’s not possible to reinstall the computer or reformat the drive should something go seriously, catastrophically wrong.

Much to my horror, the Best Buy employee who sold me the netbook explained that none of the machines in their store came with real operating system disks; they would all cost $200 more if they did. Ta ever so, Microsoft.

Mena did come with a restore DVD—but that restores it to exactly the state it came in, including trial bloatware. (Norton. What idiot would put a destructive thing like Norton onto a poor tiny defenseless little netbook?) So my idea was to remove the bloatware and make a drive image with the basic OS.

Since Mena wouldn’t talk to my external CD drive, I couldn’t use my old standby Bart-PE disk with Norton Ghost on it. I did a quick search on drive imaging software and came across this handy list of free drive imaging and partitioning software. I decided to try out Macrium Reflect Free on Mena. Macrium informed me that Mena’s hard drive has not merely two partitions, but in fact four. (I’d guessed there was a hidden one for the restore function; I’m not sure what the fourth is, nor even why they divided the Windows partition in two.) It backed up the complete drive at a medium compression level in less than an hour over a USB connection. So far it seems like a good product.

But the tricky thing here is not making the drive image. It’s performing that bare-metal restore. Macrium (and the other products listed on that page, as well as the commercial tools) will let you create an emergency restore CD to use when Windows won’t boot. (And why else do you need a complete image of your drive, except for when Windows won’t boot?) But that’s not much good if I don’t have a usable CD drive. Not only am I not all that keen to buy a second external CD drive, I am even less keen to pack it along when I travel.

There’s a second, somewhat geekier option: creating a bootable USB stick that contains the CD image. This appears to fall into the “Kids, don’t try this at home” category. HP (of all people) has a tool to simplify the process, but that doesn’t appear to make it all that simple. The Ur-Guru has offered to create said USB stick for me when next he is here (June), and I will make him document the process for this blog, but right now it doesn’t seem to be an option that’s open to the non-geek.

So if you’re a netbook owner and not up to making your own bootable USB stick, your options appear to be: 1) buy that portable external CD/DVD drive or 2) find a geek to make you a bootable USB stick with the recovery CD on it.

Meanwhile, you can back up any data you keep on the netbook normally: just download your software program of choice, install it, select your destination and the files to be backed up, and off you go.