Last week (it feels like last year, because I wrote that post in advance, unlike this one, which I am writing at the last minute) I wrote about the effective combination of WP-DB-Backup and WordPress Backup from Blog Traffic Exchange. These two plugins send backups by e-mail on a weekly basis. Given that I have (pause to count on fingers) five WordPress sites of my own (two for the Podcast Asylum, one for the Author-izer, the FileSlinger site, and the new personal site that I hardly ever get to work on, that would be a lot of backups coming in even if I didn’t also have client websites in WordPress to keep track of. (More counting on fingers.) Five of those, too, though I just added the fifth one this week and it’s not configured yet. It’s probably just as well they don’t all come in on the same day—or on the same e-mail account, for that matter. The database backups are mostly not that large (except the one for this blog), but the plugins and uploads backups can get hefty.

I’m starting to think that I should set something up in Outlook that automatically forwards the client backups to the clients. After all, it’s their data. Even if they don’t know what to do with it, they should have access to it. That’s why I always make sure to provide them with the passwords to the sites I set up for them. (Though that reminds me, I should probably make a couple of CDs or ZIP files with the themes on them…) But I digress, already.

Today’s topic is keeping track of where your data goes when you back it up. This can actually be an issue even for people who have only one backup drive or device, if they make manual backups and don’t put the files in the same place every time. (Not to mention any names. You know who you are.)

For people like me, who just keep adding backup software and external drives into the system, remembering what gets backed where becomes more than the naked brain can handle. I know that all my client and business-related files are backed up. But until I sat down this morning to map them out, I didn’t know how many backups I had. And I needed to update some of those backups, too, because I did some more file restructuring and created a catch-all folder for business-related files that affect all three of my business personas.

Creating a really complete map of everything on my system that gets backed up will have to wait until I can take a whole day to work on it, but here’s what I came up with for the four business-related folders (!Author-izer, !FileSlinger, !Podcast Asylum, and !Rhymes with Sketch Inc): 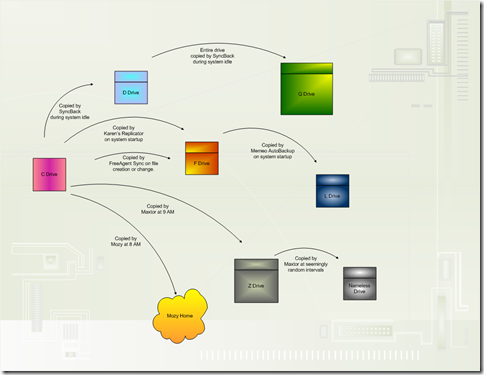 Anyone who actually knows how to make an information flow chart in Visio will be dying of laughter right now, I’m sure. But even at this reduced scale, you should be able to see that the data goes from the C drive (that’s the pink one) to six different drives (the square boxes) as well as “into the cloud” to Mozy. And it gets copied twice to the F drive, once by FreeAgent Sync when the file is created or changed, and once by Karen’s Replicator when I boot up the computer.

Since you can’t read the annotations at this scale, I’ll list them here.

Eventually I want to streamline the processes a bit and transfer some of it over to Titan Backup, as I said a few Reminders ago. So I’ll need to sit down and make a complete map of what is and isn’t getting backed up. The business-related stuff is obviously covered—as long as it lives in those four folders. Some of it doesn’t. Windows Live Writer, for instance, stores blog posts like this one in a folder in My Documents. I’ve got that covered by FreeAgent Sync and by the daily Maxtor backup, but not by the others. Yet. Outlook gets backed up to the F drive by Replicator, and then to the L drive by Memeo, but there aren’t as many copies of my .pst files as of my documents. My audio and video files for clients don’t get backed up online because they’re too large to make that practical. (Of course, most of those are already online, on the clients’ websites, so I don’t worry about it too much.)

A word to the clients, though. Just because I keep what seems like exponentially expanding copies of the work I do for you doesn’t mean you aren’t responsible for the work once I turn it over to you. I am not a backup service provider. There are dozens, if not hundreds—possibly thousands—of them out there. Many of them are free.

Take a minute to think about it—or more than a minute, if you have a complicated file system. Do you know where your backups go?