Flavius Saracut over at Neobyte Solutions just made me a very generous offer: free copies of Titan Backup 1.5 (the not-quite-latest version) for readers of this blog/newsletter. If you want to upgrade to the latest version, 2.5, you can do so at a discount by using the coupon code NEOB-B916. The regular price for the software is $39.95.

I’m just taking a quick look at Titan myself. It has all the features you’d come to expect in a file backup program. You can back up files and folders by type or by location. (It seems quite willing to back up the files listed under “MozyHome Remote Backup” in Windows Explorer, but I’m not at all sure that would work. Perhaps I should try it, and find out.

Titan is not quite as simple and friendly to use as Spare Backup, but it does have a few handy extras. For instance, it will back up your Outlook rules. For reasons unknown to mere mortals, those don’t get saved in your .pst file, but in another Outlook file. You can export and import them manually, but that’s not something most people will remember to do regularly, so if there’s an unexpected failure rather than a planned upgrade to a new machine, you may have to re-create those rules.

In fact, you can back up a lot of different user settings, from your Windows Fonts and Scheduled Tasks to your IM programs. There are omissions from this list—presumably companies that Neobyte hasn’t worked out deals with yet. But all those Windows settings—those are the things that take ages to tweak back into place after a reinstall. (And my main laptop is way overdue for a reinstall.) As for backing up Registry keys—messing with the Registry is pretty dangerous. You certainly want to back it up before making any changes to it. Yet it would change if I reinstalled the machine, so I would not be likely to restore the Registry intact.

The ability to sync between different folders on the same computer (as well as different drives) is also intriguing. I can’t yet think what I’d use it for, but I like the idea. You can also use the sync function to create a DIY online backup to an FTP folder on your web host, for those who just don’t want anything hosted outside of their own control. You can compress and/or encrypt files, or just make straight copies. You also have the option to make differential, incremental, or “stacked” backups (what I’ve called “versioning” in other Backup Reminders).

Another bonus is the ability to run another program either before or after starting Titan Backup. The ability to run a backup program on shutdown does have considerable appeal to me. It makes more sense than doing it on startup, which is what I do now, because what if something happens between the time you shut down and the time you start up? It can also send you an e-mail message if your backup doesn’t complete properly, or just pop up an ordinary notification window.

The results of my test backup, which included Outlook settings, Windows settings, and Skype: 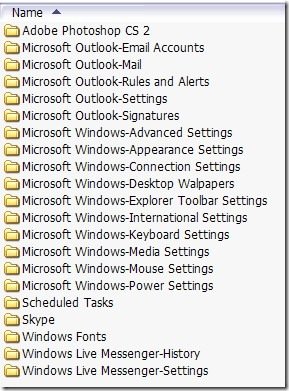 It’s fascinating (to a geek like me, anyway) to find out where and how all these things actually get stored. Inside some of those folders are registry settings. Rather to my surprise, all my Microsoft templates (Word, PowerPoint, Publisher) got backed up under “Outlook Settings.” My Outlook signatures appear in three formats: text, RTF, and HTML. (I guess that makes sense—those are the three formats in which Outlook composes mail. But I only ever created them as text, since I’m the old-fashioned sort who prefers plain-text e-mail.)

Under “Scheduled Tasks,” I found my SyncBack jobs, but also the Apple Software Update. I hate that bloody thing. I want to remove it, not back it up. And, hmm…Rescue Reminder for 2HAA0GP3. I think that’s something for a backup program I don’t use any more. Yes, I really need to reinstall this machine. And as it’s possible to restore individual items from a backup job, even those registry settings, I can be selective about what I retrieve. (I’m pretty sure that doing a drag-and-drop restore with registry settings would be a Very Bad Idea.)

Titan Backup, like Backup4All, which I reviewed several years ago, comes from Romania. I have a soft spot for Romania, though I’ve never been there, because my best friend when I lived in England was from Romania. (She’s an engineer, but apparently so is everyone else who went to university in Romania during those years; if she’d been a Yank, she would have been an art history major.) I also like the interesting relics of Latin in the Romanian language, which is nevertheless quite different from other Romance languages. I never did learn to speak or read it, though.

There’s a distinct possibility I may consolidate some of my existing backup jobs and use Titan Backup instead, just because of those sophisticated little extras.